Shares of DURECT Co. (NASDAQ:DRRX) have been given a consensus rating of “Hold” by the ten analysts that are presently covering the stock, Marketbeat reports. One analyst has rated the stock with a sell rating, three have assigned a hold rating and five have assigned a buy rating to the company. The average 12-month price objective among analysts that have issued a report on the stock in the last year is $5.02.

In other news, major shareholder Lp Bleichroeder sold 250,000 shares of the business’s stock in a transaction that occurred on Tuesday, September 1st. The stock was sold at an average price of $1.68, for a total value of $420,000.00. The transaction was disclosed in a document filed with the SEC, which is accessible through this hyperlink. Insiders own 5.20% of the company’s stock.

There’s a reason so few investors are ever able to beat the market: they’ve been lied to. They have no idea what really drives stock prices. When you discover exactly why stocks rise or fall, it’s easy to avoid losers and find more, bigger winners.

DURECT (NASDAQ:DRRX) last issued its earnings results on Monday, August 3rd. The specialty pharmaceutical company reported $0.07 earnings per share (EPS) for the quarter, topping analysts’ consensus estimates of $0.02 by $0.05. DURECT had a negative return on equity of 7.69% and a negative net margin of 3.66%. The business had revenue of $25.84 million during the quarter, compared to the consensus estimate of $19.76 million. As a group, equities analysts anticipate that DURECT will post -0.06 earnings per share for the current fiscal year.

DURECT Corporation, a biopharmaceutical company, researches and develops medicines based on its epigenetic regulator and pharmaceutical programs. The company offers ALZET product line that consists of osmotic pumps and accessories used for experimental research in mice, rats, and other laboratory animals; and a range of biodegradable polymers for pharmaceutical and medical device clients for use as raw materials in their products under the LACTEL brand.

Further Reading: The mechanics of the bid-ask spread in trading 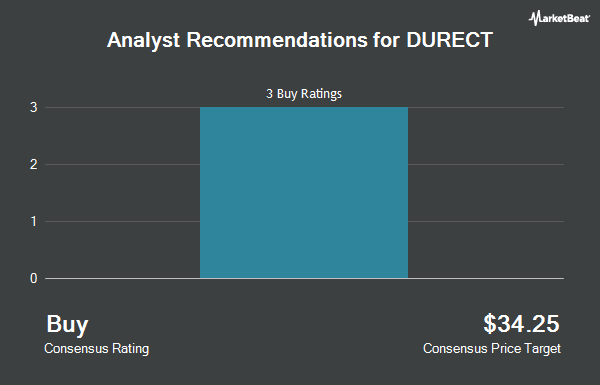 7 Virus-Resistant Retail Stocks to Own Now

The U.S. economy contracted by 5% in the first quarter. That was slightly larger than the 4.8 decline that was previously forecast. On the same day that GDP was released, we also learned that the ranks of those filing for unemployment claims exceeded 40 million.

But as sobering as those numbers are, they’re not completely surprising. The U.S. economy was effectively shut down as citizens did their part to slow the spread of the novel coronavirus. But the cost of those efforts is just being measured.

And one of those measurements comes in the all-important Consumer Confidence Index. The index ticked up slightly in May to 86.6. While this number is about 30% lower than where the index sat In February, it’s significantly higher than where it sat at the trough of the financial crisis and subsequent recession.

And a big reason for that is that while the brick-and-mortar economy shut down, the digital economy helped give the economy a pulse.

Consumption is a key part of our economy. That’s why consumer confidence makes up 70% of the U.S. economy. And one of the key ways that consumers express that confidence or lack thereof, is in the retail sector.

For the last few years, the story of retail has been about which retailers were going to be able to successfully compete in the e-commerce space that is still owned by Amazon (NASDAQ:AMZN). Sadly, we’re discovering that some companies, like J.C. Penney, were late to adapt in a meaningful way. But that isn’t the case for all retailers.

In this special presentation, we are identifying 7 retail stocks that have done well through this turbulent time and should use that as a springboard to continued growth.

View the “7 Virus-Resistant Retail Stocks to Own Now”.