Skip to content
… the current environment, the changing role of technology in our lives and his insights into the not-for-profit sector and the importance of philanthropy.

Nicholas Moore had a distinguished 33-year career at Macquarie Group, culminating in his decade long tenure as Chief Executive Officer from 2008 – 2018. It is worth noting that Moore guided Macquarie through the depths of the Global Financial Crisis and set the course for the subsequent recovery.

To launch the Future Generation Virtual Forum, Belinda Hutchinson AC will host a live interview with Nicholas Moore starting at 4:00 pm today. The discussion will cover Nicholas’ views on what is required to underpin Australia’s economic recovery, the outlook for markets, how he is investing in the current environment, the changing role of technology in our lives and his insights into the not-for-profit sector and the importance of philanthropy.

Click on the player below to access the live stream, a replay will be available immediately after the event via the same link.

Servicing sensitivity analysis is a financial modelling tool which, in the … to $9.5 in 2017, according to Arcview Market Research and BDS Analytics.

The recent times in the Australian economy have been thickly clouded with consecutive reforms and updates on the housing front, the interest rate cutsby the Reserve Bank of Australia and regulatory changes that have brought major banks of the Aussie land in the forefront of financial discussions.

In our article on the 100 years of the Australian equity market, we pointed out an interesting fact- Financial institutions, especially banks, have been the main contributors towards the Australian output and employment, and this trend has not undergone a significant drift over thecentury Even though the financial sector of any economy is often prone to a flux, the Australian financial system has witnessed changes and continued to remain significantly strong in the country’s economic structure.

Market experts believe that this regulatory change, rather enhancement, is a positive signal for the borrowers who have been willing to apply for a loan off late.

Following a similar route, MQG would adhere to the RBA’s 25 basis point cut and lower the variable rates by 20 basis points, along with the fixed rates, which would go down by 40 basis points.

Other major banks on the same path: Westpac Banking Group (ASX: WBC) and Australia and New Zealand Banking Group Limited (ASX: ANZ) had been part of the bandwagon already and have implemented similar changes recently, with Westpac reducing its floor rate to 5.75 per cent from a 7.25 per cent figure. ANZ had lowered its sensitivity and floor rates rate to 5.5 per cent and 2.5 per cent, respectively.

Market experts believe that the other two banks of the Aussie land, National Australia Bank (ASX: NAB) and Commonwealth Bank of Australia (ASX: CBA) would soon follow suit and revert in a similar fashion in the days to come.

Servicing Sensitivity Margin and Floor Rates: Bring back the basics to understand the above discussed changes; in banking terminology, an interest rate floor is an affirmed rate in the lower range of rates that is linked with a floating rate loan product. Contrary to the concept of interest rate caps, the interest rate floors are primarily used in derivative contracts and loan agreements.

Servicing sensitivity analysis is a financial modelling tool which, in the banking space, is used to scrutinise and decipher a reasonable and most apt assessment for the existing and new loan applicants.

In the light of this context, let us have a look at some of the recent updates pertaining to Macquarie group Limited and Suncorp Group Limited on the Australian Securities Exchange:

Company Profile: MQG is a pioneer of the financial sector and is a financial services provider of banking, financial, advisory, investment and funds management services. It has its registered office in Sydney and was listed on the ASX in 2007.

Recent Update:The Group highlighted that it had reduced its variable and fixed home loan rates, and these were set to be effective for the new loans from 5 July 2019 (for new loans) and 18 July 2019 (for the existing variable rate loans).

Company Profile: One of the leading players of the financials space in Australia, SUN is involved in the provision of banking, insurance, wealth and other financial solutions to the retail, corporate and commercial sectors. It has its registered office in Brisbane and was listed on the ASX in 1988.

Recent Update:The new variable interest rates were set to be effective from 19 July 2019, as announced by the company on 3 July 2019. Suncorp CEO Banking and Wealth, David Carter believes that the bank’s rates were amongst the most competitive in the market and the Term Deposits remain some of the best priced in market.

APRA Reforms: Adding to on the recent and consecutive drifts being witnessed in the Australian Banking Space, on 11 July 2019, Australian Prudential Regulation Authorityfirmly stated that the country’s major banks- ANZ, NAB and WBC, were bound to hold an additional capital worth $500 million, as a response to the higher operational risk that had been identified in their self-assessments. In Australia, APRA is the prime governing body which looks in to matters related to bank’s capital and financial regulations.

The Consecutive Interest Rate Cuts by the RBA- An Unusual Step

Any discussion on banking and financial reforms, in the present Australian context would remain incomplete without the mention of the consecutive interest rate cuts done by the RBA in the country, affecting all parties of the financial sector. It was asserted from this regulatory move that the RBA expects the Aussie banks to forward the maximum rate deductions to the borrowers.

Role of the Banking Royal Commission: A reformative addition to the Australian banking space, the Banking Royal Commission was set up in 2017 with the aim to detect the misconducts of Australia’s financial institutions. In its due course of action, the Commission took charge to point out discrepancies in the governance and culture of the financial system, as a result of which, it was made a mandate for banks to adhere to interest of the customers. Recommendations and changes have been a regular affair in the financial space, ever since.

This website is a service of Kalkine Media Pty. Ltd. A.C.N. 629 651 672. The website has been prepared for informational purposes only and is not intended to be used as a complete source of information on any particular company. Kalkine Media does not in any way endorse or recommend individuals, products or services that may be discussed on this site. Our publications are NOT a solicitation or recommendation to buy, sell or hold. We are neither licensed nor qualified to provide investment advice.

The company said it had access to “parts of Telstra’s 4G and 3G network” to deliver its services. It has published a coverage map that allows users to …

Nu Mobile has quietly launched into the market with reconditioned iPhones and Galaxy devices, a chance to swap devices anytime, and the ability to rollover included data up to a 200GB limit.

The new mobile virtual network operator, which is owned by Macquarie Group, was first revealed back in April.

However, little was known about Nu Mobile at the time, aside from its model: that it would bundle a SIM with a pre-owned smartphone that Macquarie Group previously leased to other companies.

The company has now revealed its offers into the market.

It will offer Apple devices – iPhone 7, 8 and X – along with Samsung Galaxy S7 and S8s.

They can be purchased outright or paid for over two years interest-free, and come with a 12-month warranty.

In an innovative feature, Nu Mobile will allow customers to either return their handset or swap it for another one at any time.

It will “buy back” the handset even if the functionality is “significantly impaired” upon return, though the valuation will be a percentage of the balance left owing on the handset.

A SIM plan then needs to be added: these start out at $10 a month with unlimited calls in Australia and 1GB of data.

For customers that agree to pay $30 or more a month, Nu Mobile will add a one-off 80GB of data that can be used anytime.

One of the features of the larger plans is that unused data rolls over each month, to a maximum bank of 200GB, Nu Mobile said.

The company said it had access to “parts of Telstra’s 4G and 3G network” to deliver its services.

It has published a coverage map that allows users to drill down on which part of the Telstra network they are covered by.

Nu Mobile said it is still working on a “simple and affordable roaming package” but that users were better off buying a local SIM if they went overseas with their phones.

The company said it performed a “51 point check” on all reconditioned handsets, making sure they were operational and that previous data was deleted.

Renaissance Technologies LLC boosted its holdings in shares of Macquarie Infrastructure by 117.0% during the first quarter. Renaissance …

Macquarie Infrastructure Corp (NYSE:MIC) has been given an average rating of “Hold” by the seven brokerages that are currently covering the firm, Marketbeat Ratings reports. Two analysts have rated the stock with a sell recommendation, four have assigned a hold recommendation and one has given a buy recommendation to the company. The average 12-month price objective among brokerages that have issued a report on the stock in the last year is $46.67.

The company also recently announced a quarterly dividend, which was paid on Thursday, May 16th. Stockholders of record on Monday, May 13th were issued a dividend of $1.00 per share. The ex-dividend date was Friday, May 10th. This represents a $4.00 dividend on an annualized basis and a dividend yield of 9.86%. Macquarie Infrastructure’s dividend payout ratio is currently 188.68%.

Macquarie Infrastructure Corporation owns and operates a portfolio of businesses that provide services to other businesses, government agencies, and individuals. It operates through: International-Matex Tank Terminals (IMTT), Atlantic Aviation, and MIC Hawaii segments. The IMTT segment offers bulk liquid storage, handling, and other services for petroleum products, specialty chemicals, renewable fuels, and vegetable and tropical oils through a network of 19 terminals, including 17 in the United States and 2 in Canada. 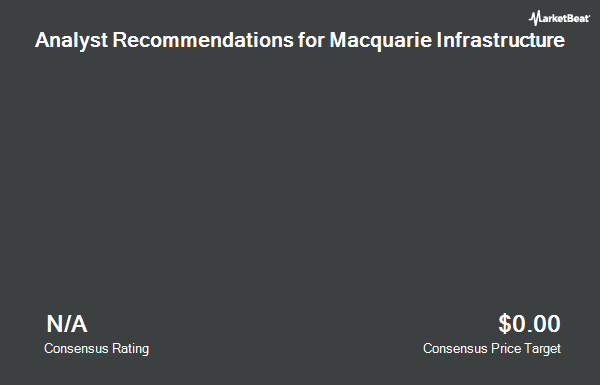