It’s noteworthy that is issued into circulation Bitcoin Cash.

Even as the majority of the cryptocurrency market has started seeing small losses, Litecoin (LTC) has been hitting new milestones to help it make …

Even as the majority of the cryptocurrency market has started seeing small losses, Litecoin (LTC) has been hitting new milestones to help it make bullish waves lately.

The market has definitely seen an improvement overall in 2019, especially when compared to the situation as it was last year. However, cryptocurrency price charts clearly indicate that the current market sentiment is not as bullish as it was between April and July of this year. The bullish year has been seeing several months of stagnation right now, and many have turned neutral to bearish.

Surprisingly enough, Litecoin’s overall performance has been seen as bullish, even during this period. This situation is even more interesting considering the fact that LTC went through a reward halving only a little over a month ago. A halving is a rare occurrence and it is difficult to predict how the LTC price might behave afterward.

But, now that the halving is in the past, LTC is finally able to move on, and it did so in a positive way. According to new data, there are five major reasons for Litecoin’s new bullishness.

Why Is LTC Bullish?

As mentioned, there are five aspects and fundamentals that have been improving for LTC lately that could be adding to its value.

The first is the fact that the concentration of large holders is growing. This is always a good sign for a coin, as it shows that a lot of people have faith in it. If LTC holders are willing to accumulate, this seems to be an especially good sign for the project.

Next, the number of large Litecoin transactions has improved as well. Most likely, these transactions are being boosted by large the large amounts of LTC that are being bought and possibly transacted to storage.

Third, is the curious behavior of LTC price. It’s not been on a constant rise, but it has been relatively stable when considering the rest of the market. Litecoin traded between $69 and $72 in the past week, meaning that there is only about a 6% difference between its lowest and highest points in the past 7 days. 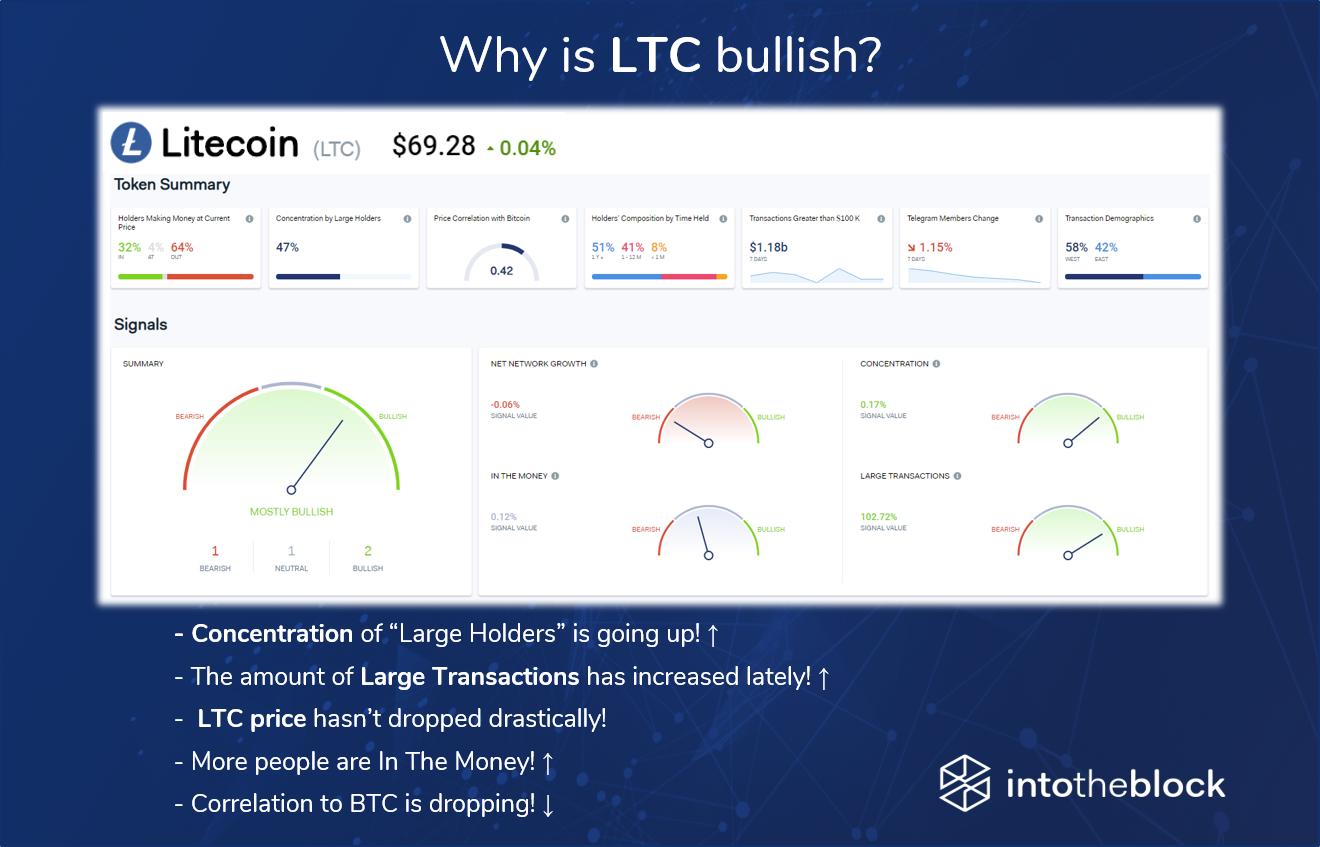 There are also more people than ever that are in the money (ITM), a term that refers to options that possess intrinsic value. Basically, it means that something has value at a strike price, which is favorable in comparison to the prevailing market price of the underlying asset.

Finally, Litecoin’s correlation to Bitcoin itself is dropping, which is rare to see in the cryptocurrency space. As the first cryptocurrency, and the coin with the largest price and highest market cap — Bitcoin is the most dominant asset in the entire industry. As such, it has been known to dictate the behavior of the market and most coins in it.

So far, there has been a handful of cryptocurrencies that have managed to reduce its influence, with Binance Coin (BNB) often being referred to as the only coin ever to do it successfully. Now, LTC might be on the road to do the same, which is especially difficult, since LTC code was created from Bitcoin’s template.

If these positive factors continue on their current course, LTC might truly become one of the best performers in the market in Q4 and on it to 2020.

What do you think of Litecoin? Have you, or do you plan to invest in it? Share your thoughts in the comments below.

Buy and trade cryptocurrencies with a 100x multiplier on our partner exchange, StormGain.

As a trusted news outlet in the blockchain and cryptocurrency industry, BeInCryptoalways strives for the highest journalistic standards and adheres to a strict setof editorial policies. BeInCrypto is an independent website with authors and managementthat may personally invest in cryptocurrencies or blockchain startups.

According to a Sept. 13 blog post, KyberSwap’s users can now buy digital currencies directly with fiat currencies, taking into account that the exchange currently supports trading of Ether (ETH) and ERC-20 tokens only.

Later in July, Binance announced further expansion of its fiat-enabled trading platform in Singapore, but with limited functionalities and only one trading pair.

As reported at the end of May, Coinbase’s Emilie Choi said:

This article provides a quick overview of how the crypto markets have been doing—with the focus on Bitcoin (BTC), XRP, Bitcoin Cash (BCH), Binance …

This article provides a quick overview of how the crypto markets have been doing—with the focus on Bitcoin (BTC), XRP, Bitcoin Cash (BCH), Binance Coin (BNB), Dash (DASH), and Ethereum Classic (ETC)—over the past 24-hour period.

As you can see in the price chart below, since September 2, Bitcoin has been trading between $10,000 and $10,900, and at press time, it is trading around $10,300. It seems like Bitcoin needs a major positive catalyst for the price to climb above the $11,000 mark. The opening of the Bakkt Warehouse on September 6, sadly, made no difference to the price of Bitcoin, but the launch of future trading on the Bakkt platform on September 23, especially if there is significant trading volume, might make a positive impact.

Ripple CEO Brad Garlinghouse gave an interview to CNN on September 12 during which he was asked about allegations that Ripple is dumping XRP on the market. He replied:

In the XRP community, Ripple is the largest owner, and we are the most interested party in the success of the XRP ecosystem… We are clearly interested in a healthy, successful XRP ecosystem, and we would never do that.

On September 12, in an interview with Bloomberg, David Shin, the head of the exchange division of Bitcoin.com, the main company promoting/supporting Bitcoin Cash (BCH), mentioned that Bitcoin.com is planning to get BCH futures listed on a CFTC-regulated crypto derivatives exchange such as the CME. However, the lack of substance in this news means that BCH has not received any kind of boost so far.

DASH is enjoying a 9% price surge today probably due to the news that it will be listed on Coinbase Pro on September 16 (with trading become available possibly as early as September 17).

Yaz Khoury, ETC Cooperative’s Director of Developer Advocacy, took to Twitter to congratulate everyone connected with the project:

Congratulations @eth_classic on the successful activation of the Atlantis Hardfork!

Shin believes that Bitcoin Cash could surge in value compared to other cryptocurrencies on the market if had better liquidity. He envisions BCH …

While we usually think of Ethereum as the crypto asset that’s most likely to be listed on a regulated futures market after Bitcoin, the company behind Bitcoin.com has other plans – according to a recent Bloomberg report, Bitcoin.com wants to make a push to get Bitcoin Cash futures contracts listed on a CFTC-regulated exchange.

The publication spoke to David Shin, who’s in charge of Bitcoin.com’s recently-launched cryptocurrency exchange. He said that Bitcoin.com has already had discussions about a potential BCH futures listing, and added that he would be very happy to speak to the CME, which has been listing BTC futures for almost two years now.

“We’ll try to list a BCH future on one of these exchanges that’s CFTC regulated to therefore have a product that can be traded into the U.S. with institutional traders. In theory we should see more penetration, more users, more trading and more volume.”

Shin believes that Bitcoin Cash could surge in value compared to other cryptocurrencies on the market if had better liquidity. He envisions BCH eventually becoming the second biggest crypto asset by market cap. As of right now, it’s hard to see how the fourth-ranked BCH could make such a push – XRP’s market capitalization is about twice as high as BCH’s, while ETH is almost quadruple the size.

BCH finished 2018 with a catastrophic price crash as the controversy surrounding the fork which led to the creation of Bitcoin SV crashed the price of BCH from over $600 to below $100 in the space of 2 months.