Skip to content
In the Ethereum community, there are some concerns regarding the current network state. More specifically, it seems the network blocks are filling up …

In the Ethereum community, there are some concerns regarding the current network state. More specifically, it seems the network blocks are filling up quicker than anticipated with no immediate solution in sight. As such, it seems various mining pools are now looking for ways to increase the gas limit per block. A stop-gap measure, albeit an interesting development regardless.

The Scaling of Ethereum

It is a well-known secret how there needs to be a scaling solution for Ethereum. While initially designed to be implemented over a year ago, the switch has been postponed multiple times since. That in itself is not necessarily a bad thing, although it does paint a very interesting picture as to where the ecosystem is headed next. No rushed solution should be implemented by any means, as that will only cause more issues.

For the time being, there is no immediate fix to Ethereum’s scaling solutions. As such, the pending transaction queue continues to grow over time. Despite a big dip at certain hour of the day, the average sits close to 100,000 transactions at any given time. There are also concerns about potential spam or dusting attacks on the network, which help fill up the blocks even quicker. Several mining pools have now taken a stance to address this issue.

Over the past few weeks, multiple Ethereum mining pools have started to raise the block gas limit to 10 million. Those pools include F2Pool, Spark Pool, and Ethermine. Although this is merely a test, these pools hope to convince the community this change needs to happen across the board. Whether or not that will prove to be a successful endeavor, is a different matter entirely.

Under normal circumstances, the Ethereum block gas limit sits at 8 million gas. A 25% increase of this kind is very significant, although it also highlights how dire the situation has become. Not all pools see this as a smart decision, as Nanopool is the only one still openly opposing this idea. That said, it only takes three pools to increase the capacity permanently. This creates a very intriguing situation worth keeping an eye on in the weeks and months ahead.

Creative solutions like this one are nothing more than a bandaid on a hemorrhaging wound, in the end. It can offer some minor relief, but the big fix still needs to materialize. The sooner that happens the better, albeit, in the case of Ethereum, it will take a while. Their Ethereum 2.0 upgrade is supposed to increase the network capacity exponentially, although its release date remains unclear.

It is good to see the developers taking their time to ensure the upgrade works as expected. The last thing the network needs is a half-baked solution which only makes the situation progressively worse. Even so, the overall “usage’ of Ethereum seemingly continues to increase. That in itself can create additional problems if no other solutions are proposed by network participants. 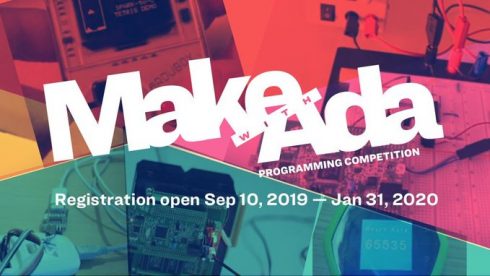 AdaCore announced the start of its 4th annual “Make with Ada programming competition” with the goal to design and implement an embedded software project in which Ada or SPARK are the primary languages used.

“Many programmers tend to discount Ada and SPARK because of the many myths surrounding Ada, including Ada is too complex to implement and too complex to learn,” said Bill Wong, one of the competition’s judges. “As contestants of this annual programming competition demonstrate, developing embedded software with Ada is a lot easier than you think, and the benefits (cost savings, quality code, fewer bugs, etc.) are many.”

AdaCore was founded in 1994 and since then it has created software development and verification tools to build applications that were used in railway systems, space systems, commercial avionics, military systems, air traffic management/control, medical devices, and financial services.

The competition runs until January 31, 2020 and offers $8,000 in total prices. The full details are available here.

Google announces updates that include the Augmented Faces API coming now for iOS, improvements to Cloud Anchors such as persistent Cloud Anchors, and Call for Collaborators.

The Augmented Faces API offers a high-quality, 468-point 3D mesh that lets users attach effects to their faces without a depth sensor on their smartphone. The Cloud Anchors API lets devices create a 3D feature map from visual data on which anchors can be placed.

Now, more angles across larger areas in the scene can be captured for a more robust 3D feature map when an anchor is created. The visual data used to create the map is deleted and only anchor IDs are shared with other devices to be resolved.

The full details on the updates are available here.

Element AI announced that they raised about $151 million in series B funding that it will use to accelerate the deployment and commercialization of solutions that meet customer needs for the operationalization of AI, while continuing to develop AI products.

“Operationalizing AI is currently the industry’s toughest challenge, and few companies have been successful at taking proofs-of-concepts out of the lab, embedding them strategically in their operations, and delivering actual business impact,” said Element AI CEO Jean-François (JF) Gagné. “We are proud to be working with our new partners, who understand this challenge well, and to leverage each other’s expertise in taking AI solutions to market.”

The full details are available here.

If you’re seeing this message, that means JavaScript has been disabled on your browser.


Model logos are crucial in trendy advertising and commercial period. Advertising and Advert Tech firms place model commercial all over the place from the billboards within the corners of the streets and sports activities stadiums to social media and TV channels.

Computerized Emblem recognition in photographs and movies is extremely demanded in a variety of use-cases:

1- Sensifai emblem recognition instrument helps firms and types to investigate the length and variety of the looks of their Adverts in social media and broadcasted content material and fine-tune their advertising methods and choices. That is essential in at present’s period of mistrust between the manufacturers and advertising companies. Think about a soccer match and your ads as a billboard across the discipline within the stadium. You certainly care about how lengthy your commercial appeared on completely different channels which broadcasted the match. Sensifai emblem recognition API can assist you!

2- Manufacturers can use Sensifai video AI and emblem recognition instrument in video and picture to observe social media and video sharing web sites to keep away from copyright infringement and shield their model.

3- A mixture of Sensifai video AI, picture recognition, NLP and emblem recognition can assist the model to acknowledge the context of the video in video-sharing web sites or social media or some other web site the place their commercial was positioned. Clearly, manufacturers are very eager their commercial seem on a related web site/content material and in a pleasing context.

Think about that CocaCola commercial seems in a creepy video of trafficking in youtube. That is certainly one thing that CocaCola tries to keep away from.

As an alternative, they like the ADs to seem in cooking movies. Sensifai brings the required video AI and pictures recognition instruments to acknowledge the context of movies and web sites the place your model emblem seems.

4- Emblem recognition of automobiles may also be utilized in clever traffic-control programs particularly when it’s mixed with OCR of license plates.

Sensifai provides a extremely scalable video AI system as a smartphone App or API to investigate, acknowledge and tag the picture, speech, and video and make them searchable. Customers and builders can add video, speech and picture recognition system to their merchandise and Apps with none have to the machine studying experience. Sensifai’s video evaluation app and API introduces a well-organized indexing technique to handle your multimedia content material in a velocity of 1X to 100 X quicker than real-time and acknowledges motion and exercise, celeb, model emblem, scene, speech, music style, object and not-safe-for-work content material in any given video or picture.

The Hyperledger technical steering committee (TSC) has elected another IBM official as its chair amid controversy over the tech giant’s increased representation on the panel.

Arnaud Le Hors, a senior technical staff member for blockchain and web open technologies at IBM, succeeds Dan Middelton, a principal engineer with Intel, according to an email sent to the TSC mailing list Wednesday.

“I’m happy to have the chair role in good hands,” Middelton wrote to the list.

A year ago Middelton replaced Christopher Ferris, CTO of open technology at IBM, who had chaired the TSC since 2016.

During the last year, the TSC launched the Diversity, Civility and Inclusion working group, which focuses on diversity broadly but is more focused on demographic rather than corporate diversity, Middelton told CoinDesk in an email.

Over the same period, the consortium has seen more collaboration between projects, like Hyperledger Ursa, a tool that was worked on by developers from Hyperledger’s Indy, Sawtooth and Fabric projects.

When it comes to influencing Hyperledger, code is king, Middleton added.

“The real influence in an open source community like this is contributions,” Middelton said. “I sort of wish that all the effort that went into discussions on the election and all the effort that will go into coming up with complex election rules just went to actual technical development.”

Neither IBM nor Hyperledger was immediately available for comment.

The Hyperledger TSC is responsible for creating working groups to focus on technical issues, approving projects and reviewing updates.

Last week, Hyperledger code contributors elected the TSC for 2019-2020, and the number of IBM employees on the committee doubled, giving Big Blue 6 of the 11 seats. This rekindled concerns that the company has an outsized influence over Hyperledger, the Linux Foundation’s umbrella group for open-source enterprise blockchain projects.

In response, executive director Brian Blehendorf suggested that the TSC discuss increasing the size of the committee with the governing board or for “one time add of a set of new TSC members, so that this greater representation can happen in the current TSC team.”

Le Hors has worked nearly 20 years at IBM and has been involved with Hyperledger since its launch, according to his bio. He served on the 2018-19 TSC and contributes to Fabric, the oldest Hyperledger platform and the basis for the blockchain Walmart uses to track food through its supply chain.