According to the report, Chakravarty had met Rahul on 21 May, on the day of Rajiv Gandhi’s death anniversary, and had presented him a list of 184 potential winners of the Congress, along with their respective constituencies and projected margins. Praveen had assured Rahul Gandhi of securing 184 seats, even if turned out to be slightly inadequate, he had promised that Congress would not be less than 164.

Congress had also alleged earlier that he had conned the Congress party by presenting a bill of Rs 24 crores for his services and has not even provided the Congress with the hard disc of the data he had collected.

Reportedly, Chakravarty sent an email to the data analytics department of Congress detailing his reflections on how his shady data failed to give correct projections for Congress. Chakravarty washes his hands off the poll debacle and says how there is nothing much we (data analytics department) could have done. The mail reportedly did not mention the failure of Shakti app, Congress’ data app, from trying to read the Modi wave in the second term.

In fact, the report had suggested, without naming any senior functionary within the Congress, that Chakravarty fed the Rafale controversy into Rahul Gandhi’s head but a lot of senior leaders didn’t really follow the Rafale bogey Rahul was riding on.

Chakravarty was the founding trustee of the dubious database with faulty ‘fact-checker’ had also stated that the BJP victory in 2014 was a ‘black swan’ which could not be repeated. His analysis and data were found to be inconsistent with the reality as the BJP not only repeated it but even managed to outdo itself in terms of voter share. The ‘black swan’ managed to get almost 50% vote share, way above the 31% it got in 2014.

Congress seems to be desperate to shield the crowned prince and insist that the reason for defeat rests on someone else’s shoulder. After the string of mistakes that led to the 2019 debacle, Rahul Gandhi is now planning a nation-wide stir against EVMs.

The company, backed by SoftBank Group Corp and Tencent Holdings Ltd, has until Monday to respond to the suspension notice. KKR vs SRH and MI …

BJP president Amit Shah will launch the party’s poll campaign after the Lok Sabha elections schedule was announced with a rally in Uttar Pradesh’s Agra on Sunday, and the party’s top leaders will hold rallies in every constituency across the country till Tuesday.

Asserting that national security plank will figure high on the party’s ‘Vijay Sankalp’ (Pledge for Victory) rallies planned for Sunday and Tuesday, senior party leader Mulkhtar Abbas Naqvi was quoted by PTI as saying that the BJP will launch “ground strike” against “abusers of security forces”. 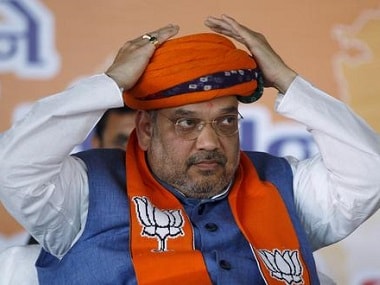 Top party leaders, including Prime Minister Narendra Modi, have been accusing the Opposition of lowering the morale of armed forces with its comments following the Balakot air strikes by the Indian Air Force.

‘Rahul Gandhi will be fighting CPM in Kerala, not BJP,’ says Pinarayi Vijayan

The Congress in Kerala has suggested party chief Rahul Gandhi’s name for the Wayanad Lok Sabha seat, which is a party bastion. AICC general secretary Oommen Chandy on Saturday said the Kerala Pradesh Congress Committee has requested Rahul to contest from Wayanad, but he has not yet commented on the proposal.

Reacting to the proposal by the Kerala unit, ruling CPM and BJP said it was due to “apprehension” of Rahul’s defeat in his Amethi seat in Uttar Pradesh. Kerala chief minister Pinarayi Vijayan asked the Congress to clarify what message it was sending out by asking Rahul to contest from the state, saying it would mean he would be fighting the “main political force” Left front and not BJP.

The Congress earlier this month announced that Rahul will contest from Amethi, and Sonia Gandhi from Rae Bareli, also in Uttar Pradesh. The move by KPCC comes after similar pleas by party state units in Karnataka and Tamil Nadu asking Rahul to contest from their respective states.

Karnataka govt open to talks with Ola over ban

The Karnataka government kept the door open on Saturday to talks with local ride-hailing service Ola to avoid a ban that could help rival Uber build market share. Karnataka earlier this week issued a notice to suspend Ola’s licence for six months for violating government rules by running motorcycle taxis which are not allowed for safety reasons.

State capital and technology hub Bengaluru is among Ola’s top three markets in India. VP Ikkeri, state commissioner for transport and road safety, told reporters the department seized and issued fines for about 258 motorcycles during a probe after complaints.

Ola’s permit, obtained in 2017 and valid to 2021, allows it to run three and four-wheeler taxis in Karnataka. The company, backed by SoftBank Group Corp and Tencent Holdings Ltd, has until Monday to respond to the suspension notice.

In the first clash of IPL 2019, Chennai Super Kings defeated Royal Challengers Bangalore by seven wickets to start the tournament with a win. Today, the tournament heads to Kolkata where the home side Kolkata Knight Riders will lock horns with Sunrisers Hyderabad. In the evening, Mumbai Indians will host Delhi Capitals.

Five-time champions India will face South Korea in their second league match of the 2019 Sultan Azlan Shah Cup on Sunday after getting their campaign started with a 2-0 win over Japan on Saturday. Goals from Varun Kumar and Simranjeet Singh helped India beat Japan. World No 17 South Korea began their campaign with a stunning 6-3 win over Canada, who are ranked 10th in the world rankings.

Apple accidentally revealed that the next-gen iPhone will have a “wireless powershare” feature which will let the device charge other Qi-compatible devices wirelessly. Sources have claimed that this wireless charging feature could be used for charging Apple Watches, which are wireless charging compatible. More information will be revealed to users about the next iPhones in the coming months.

Firstpost is now on WhatsApp. For the latest analysis, commentary and news updates, sign up for our WhatsApp services. Just go to Firstpost.com/Whatsapp and hit the Subscribe button.

… in charge of eastern Uttar Pradesh, owned a 4.69-acre farmhouse, which they had let out on rent to a company named Financial Technology of India …

The BJP on Sunday drew attention to Rahul Gandhi’s election affidavits to question his source of income, claiming that the Congress president’s wealth had gone up from Rs 55 lakh in 2004 to Rs 9 crore in 2014.

Law minister Ravi Shankar Prasad was fielded to cast aspersions on Rahul in yet another attempt by the BJP to paint him as corrupt.

Efforts to accuse Rahul of corruption have intensified in the aftermath of the Congress president going all-out to target Prime Minister Narendra Modi with the slogan “chowkidar chor hai (the watchman is a thief)”.

“Rahul Gandhi is an MP and his source of income is his salary. The BJP would like to ask what are the factors that led to this extraordinary jump in the assets of an MP?” Prasad said.

The law minister claimed that the BJP’s “research” had revealed that Rahul and his sister Priyanka Gandhi Vadra, the new Congress general secretary in charge of eastern Uttar Pradesh, owned a 4.69-acre farmhouse, which they had let out on rent to a company named Financial Technology of India Ltd. Prasad claimed that a company promoted by FTIL was involved in the National Spot Exchange scam.

The BJP leader also asked Rahul: “Have you purchased two properties from Unitech?” Prasad claimed that Unitech was involved in the so-called 2G scam.

Blockchain is a decentralized distributed digital ledger, which is collectively maintained by a network of computers. It can be visualized as a large …