Skip to content
Our early universe, starting just a few million years after the Big Bang, was a dark place. Space was filled with clouds of neutral hydrogen, but there …

Our early universe, starting just a few million years after the Big Bang, was a dark place. Space was filled with clouds of neutral hydrogen, but there were no sources of visible light.

At some point a few hundred million years after the birth of the universe, the earliest stars began to form, as well as the first large-scale structures like galaxies. Supermassive black holes grew in the centers of those galaxies, and as the black holes accreted mass, they produced powerful radiation, appearing to us now as distant quasars. Within a billion years of the Big Bang, quasars and stars lit the universe and shaped it into its current form.

The details and precise timeline of these critical evolutionary stages, however, remain uncertain.

One way we can further understand this evolution is by using quasars as cosmic clocks. By peering back in time and exploring the earliest known quasars, we learn about the metallicity of gas at the centers of early galaxies – which reveals when this gas first became enriched with the metals formed by early stars.

Peering into a Galaxy’s Center

ULAS J1342+0928 is the most distant, oldest known quasar; it’s located at a redshift of z = 7.54, which corresponds to a time just 680 million years after the Big Bang. Onoue and collaborators obtained deep near-infrared spectra of this distant source using the Gemini North telescope in Hawaii.

By modeling the spectra, Onoue and collaborators were able to measure the ratios of certain emission lines produced within the broad line region (BLR) of the quasar, a region of clouds that orbit very close to the central black hole.

The ratios of these emission lines can serve as a proxy for the clouds’ metallicity. Since this gas is thought to have originated from the interstellar medium of the host galaxy, the metallicity of BLR gas traces the galaxy’s star formation history, telling us when stars formed and enriched this gas with metals.

Onoue and collaborators found that ULAS J1342+0928’s BLR gas has similar metallicity to the BLR gas of other quasars located at lower redshifts. This result suggests that the enrichment of gas at the centers of galaxies is already largely completed within just 680 million years of the Big Bang – which constrains our understanding of when and how stars form and evolve in the early universe.

What’s next? We need observations of even more distant quasars to push this limit even farther back in time; while we’ve spotted a handful of galaxies at redshifts above z = 8, we’ll need to keep hunting to find quasars at these larger distances so that we can measure their metallicity.

Research Report: “No Redshift Evolution in the Broad-line-region Metallicity up to z = 7.54: Deep Near-infrared Spectroscopy of ULAS J1342+0928” 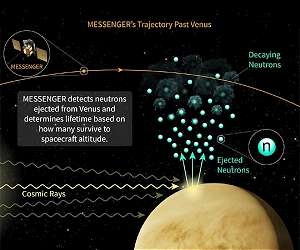 Scientists have found a way of measuring neutron lifetime from space for the first time – a discovery that could teach us more about the early universe. Knowing the lifetime of neutrons is key to understanding the formation of elements after the Big Bang that formed the universe 13.8 billion years ago. Scientists at Durham University, UK, and Johns Hopkins Applied Physics Laboratory, USA, used data from NASA’s MErcury Surface, Space ENvironment, GEochemistry, and Ranging (MESSENGER) spacecra … read more