Skip to content
The universe would be a pretty boring place without stars. … has launched an ambitious new initiative with NASA’s Hubble Space Telescope, called …

As the basic building blocks of the cosmos, stellar nuclear fusion furnaces forge new heavy elements, enriching their parent galaxy. The radiant energy from stars potentially nurtures the emergence of life on the most favorably located planets, as it did on Earth.

ULLYSES is Hubble’s largest observing program ever in terms of the amount of time Hubble will dedicate to it. More than 300 stars will be included. Ultraviolet (UV) light from the target stars is being used to produce a library of the spectral “templates” of young, low-mass stars from eight star-forming regions in the Milky Way, as well as fully mature high-mass stars in several nearby dwarf galaxies including the Magellanic Clouds.

“One of the key goals of ULLYSES is to form a complete reference sample that can be used to create spectral libraries capturing the diversity of stars, ensuring a legacy dataset for a wide range of astrophysical topics. ULLYSES is expected to have a lasting impact on future research by astronomers around the world,” said program lead Julia Roman-Duval of STScI.

STScI is now releasing the first set of ULLYSES observations to the astronomical community. These early targets are hot, massive, blue stars in several nearby dwarf galaxies.

Hubble is located above Earth’s atmosphere, which filters out most UV radiation from space before it reaches ground-based telescopes. Hubble’s ultraviolet sensitivity makes it the only observatory up to the task because young stars radiate a lot of their energy in the UV as they grow chaotically in fits and starts while feeding on infalling gas and dust.

The program’s goal is to give astronomers a much better understanding of the birth of stars and how this relates to everything from planets to the formation and evolution of galaxies. Astronomers want to learn how young low-mass stars affect the evolution and composition of planets forming around them. Intense UV radiation pulls apart molecules and penetrates circumstellar disks, where planets form, influencing their chemistry and affecting how long the disks survive. This has a direct bearing on planet habitability, atmospheric escape, and chemistry.

“This unique collection is enabling diverse and exciting astrophysical research across many fields,” Roman-Duval said.

In addition, the torrential outflows of hot gas from fully mature stars that are much more massive than our Sun shape their environments in dramatic ways. By targeting massive stars in nearby galaxies with low abundances in heavy elements, similar to the primitive composition of early galaxies, astronomers can gain insights into how their outflows may have influenced early galaxy evolution billions of years ago.

The design and targets of these observations were selected in partnership with the astronomical community, allowing researchers from around the world to help develop the final program as well as have the opportunity to organize coordinated observations by other space- and ground-based telescopes at different wavelengths of light.

STScI scientific and technical staff are designing software specifically related to the development of databases and web interfaces to ensure wide access to the library by the astronomical community. Tools for high-level science products and spectroscopic analysis are being developed. All of the data are stored in STScI’s Mikulski Archive for Space Telescopes (MAST).

The ULLYSES program is building a legacy for the future, creating a comprehensive database that astronomers will use for research for decades to come. The archive also complements the portions of the star-formation story that will soon be obtained with infrared-light observations from NASA’s upcoming James Webb Space Telescope. Working together, both Hubble and Webb will provide a holistic view of stars and the star-formation history of the universe.

To learn more about the ULLYSES program, visit here

Stellar Chemistry, The Universe And All Within It 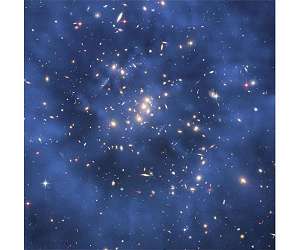 Astronomers have discovered that there may be a missing ingredient in our cosmic recipe of how dark matter behaves. They have uncovered a discrepancy between the theoretical models of how dark matter should be distributed in galaxy clusters, and observations of dark matter’s grip on clusters. Dark matter does not emit, absorb, or reflect light. Its presence is only known through its gravitational pull on visible matter in space. Therefore, dark matter remains as elusive as Alice in Wonderlan … read more