XLAM worked with the client and project partners to supply a comprehensive mass timber solution for the construction of a new timber innovation hub in Rotorua, New Zealand.

Te Whare Nui o Tuteata, also known as the Scion Innovation Hub, is a three-storey 2000m² engineered timber building that functions as a demonstration project to showcase timber technology and sustainability in construction.

As Australasia's largest and most experienced mass timber provider, XLam was engaged to supply and install mass timber products, with the company providing both technical and commercial input throughout the project. The distinct triangle entrance of Te Whare Nui o Tuteata features XLam CLT with intersecting glulam (GLT) triangular frames that create a triple-peak portal. XLam also supplied the CLT used for the mid floors, AirStairs and landings, as well as the lift core, and some of the meeting room walls.

At the end of construction, an assessment was conducted to calculate the entire environmental impact of the building. Including sequestered carbon, the volume of timber used throughout the project cancelled out the amount of CO2 emissions produced during the build, meaning that Te Whare Nui o Tuteata is one of the few commercial buildings in the world to achieve net-zero embodied carbon emissions.

Te Whare Nui o Tuteata showcases timber technology in construction by utilising different engineered timber products to form the building’s floors, stairs, lift shaft, partitions, and primary structural bracing. The approach of displaying mass timber in many forms was part of the architectural concept, with the building’s hallmark timber diagrid used to form the structural bracing – believed to be a world-first of its size.

The 8-metre-tall timber diagrid frames and entry canopies use GLT and laminated veneer lumber (LVL). The diagrid comprises of 88 diamond and triangle-shaped frames that use innovative dovetail node joints to slot and glue together in a celebration of engineered timber craft. The connections between the diagrid sections consist of flexible U-shaped steel plates (UFP plates) that act as energy dissipation devices between the timber frames. The connections also include a component designed to deform during severe earthquakes in order to protect the building. 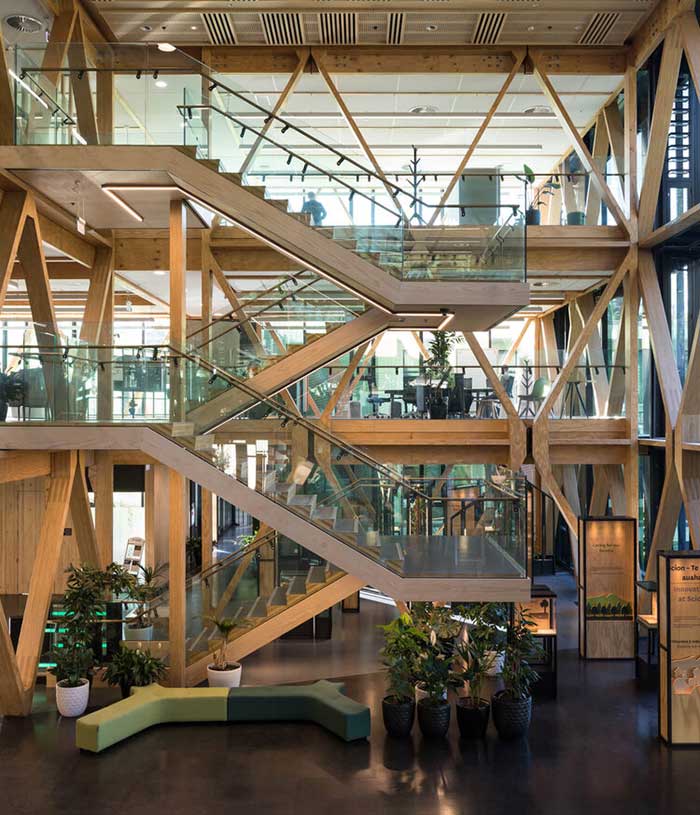 “We wanted to provide the opportunity for the wider community to experience the future that a forest-based circular bioeconomy can deliver and provide the public with examples of the research Scion is doing to support a low-carbon and renewable future for Aotearoa,” Scion CEO Julian Elder said.

The celebration of timber continues with CLT floors, lift shaft panels, meeting room walls and doors, along with two stunning, cantilevered staircases ‘floating’ on either side of the atrium. The atrium ceiling features an intricate pattern of battens and plywood panels that are inspired by the structure of a radiata pine genome.

At completion, over 550m³ of timber was used throughout the building, translating to a total of 454.64kg of carbon sequestered from the atmosphere and stored within the timber. This is equivalent to the amount of CO2 emissions produced throughout the build, from materials such as steel, glass, and concrete, as well as manufacturing, transportation, and installation. When incorporating sequestered carbon, Te Whare Nui o Tuteata achieved net-zero embodied carbon emissions, possibly the first building in New Zealand of this size to be able to make this claim.

Through their combined efforts, Scion, XLam and the project partners were able to create a space that truly showcases the possibilities of timber through innovation.