Skip to content
An analysis by Goldman Sachs found firms that have more women in senior positions as managers or on their boards outperform in their sectors [FILE: …

Companies with a higher presence of female executives have historically rewarded their equity investors with better performance, said Goldman Sachs Group Inc. strategists as they unveiled a basket of European firms that employ an elevated number of women.

“Over more or less any period since the global financial crisis, having more women in senior positions as managers or on the board is associated with company outperformance relative to the sector,” the strategists led by Sharon Bell wrote in a note on Tuesday. They added that this doesn’t apply to all industries and that academic research isn’t yet conclusive on this trend.

Goldman analysts rolled out a new basket of European companies with the most women at all levels, called Womenomics (GSSTWOMN Index), which includes firms such as LVMH Moet Hennessy Louis Vuitton SE, Swedbank AB, Nestle SA and AstraZeneca Plc. French and Nordic companies dominate the list, said the strategists, as France has a quota system for female board members while the Nordic region has historically had higher female labor participation.

Europe is beating the U.S. in its push to make women a more equal part of the workforce, and although the pay gap between men and women remains large in the region, it’s smaller in all major countries in Europe than in the U.S., Canada and in Japan, according to Goldman. Workforce participation rates among women in Europe have been rising, while in the U.S. they’ve been flat since the late 1990s, said the strategists.

The research weighs in on the market debate regarding the importance of investing based on environmental, social and governance principles. Europe has been seeing a boom in appetite for such investing this year, with about 50% of all new exchange-traded funds in Europe, the Middle East and Africa this year ESG-related and accumulating about $4.2 billion in assets, according to Citigroup Inc. data. That compares with $3.8 billion for new non-ESG funds.

Inflows into ESG-focused strategies may have contributed to the better equity performance among companies with higher female presence, Goldman said.

“The price outperformance may be a function of flows into ESG funds targeting diversity metrics, rather than more women producing better outcomes or lower risks,” the strategists said. “But even if this were the case, we continue to believe investors will value higher social and governance scores for companies, so companies that do perform well on these metrics should continue to attract both flows and a premium.”

As a to-be-sure, Goldman strategists also added that they weren’t able to find a correlation between higher female presence and returns on equity. While the outperformance of companies with more women is “pretty robust” for different time periods, in industries like technology it doesn’t work, according to Goldman, as the sector has been slow to improve its diversity.

Goldman’s Europe Womenomics index is down about 7.8% this year, compared with a drop of 11% for the benchmark Stoxx Europe 600 gauge. Over the past five years, the difference is much more significant, with Womenomics up 22% compared with a gain of around 4.2% for the Stoxx 600.

The companies in the basket have on average 46% female employees, compared with 36% for the benchmark Stoxx Europe 600 Index. In addition the selected companies have 40% female managers and 42% women on the board.

Goldman doesn’t believe females in the workforce will be more adversely affected than men by the fallout from Covid-19. While women are more heavily represented in such industries as travel, media and retail, which have seen strong profit declines during this year’s crisis, more women are employed by the public sector, where salaries have held up better.

Longer-term social changes as a result of the pandemic could also benefit women, according to Goldman.

“There is likely to be less commuting, more online work and working from home, and this should enhance flexibility for both men and women,” the strategists said. “It is the flexibility of both women and men that we think has been a determinant in increasing women’s participation in the workforce in recent years.”

The Stoxx Europe 600 Index closed down 0.3% in London after gaining as much as 0.9% earlier as the U.S. and China reaffirmed their commitment to the phase-one trade deal in a biannual review. Oil stocks and miners each fell 1.3% or more, while travel and leisure shares rose the most among industry groups.

European stocks have been largely rangebound since early June, after a sharp rebound from the sell-off through March. Trade tensions and worries about rising coronavirus cases have tempered optimism about an economic recovery. The Stoxx 600 on Tuesday once again tested its 200-day moving average, which it has struggled to clear decisively since July.

The Stoxx 600 Chemicals Index briefly rose to an all-time high, erasing its pandemic-spurred losses, before turning lower in the afternoon.

European indexes give up their earlier gains and the majority finish down for the day.

Yet to see any news on why it has jumped.

Shares of multimedia company Urban One have soared premarket on increasing volume.

It is currently trading 62% higher at $6.74 per share. The stock initially saw a surge back in June after BLM protests increased in the US. It had since fallen but is rising once more on the back of renewed protests as media company’s such as Urban One follow the demonstrations.

Apple Plans to start selling online in India next month.

Here is more on the Exxon and Dow story…

DFS shares have surged after the company said they have seen strong demand for sofas since the lockdown has eased.

Cineworld shares are down over 11% so far today. It could be down to continued coronavirus spikes in the US delaying theatre openings. 08:28

A strong day for US equities.

That’s all from me for today, see you tomorrow!

Solo Electrameccanica is up 16%, while Ayro has had a small move of 4.41% higher.

Kandi Technologies stock has catapulted higher following a press release from the company that highlighted its formal launch of electric vehicles on the US market.

A mostly green day for US stocks! 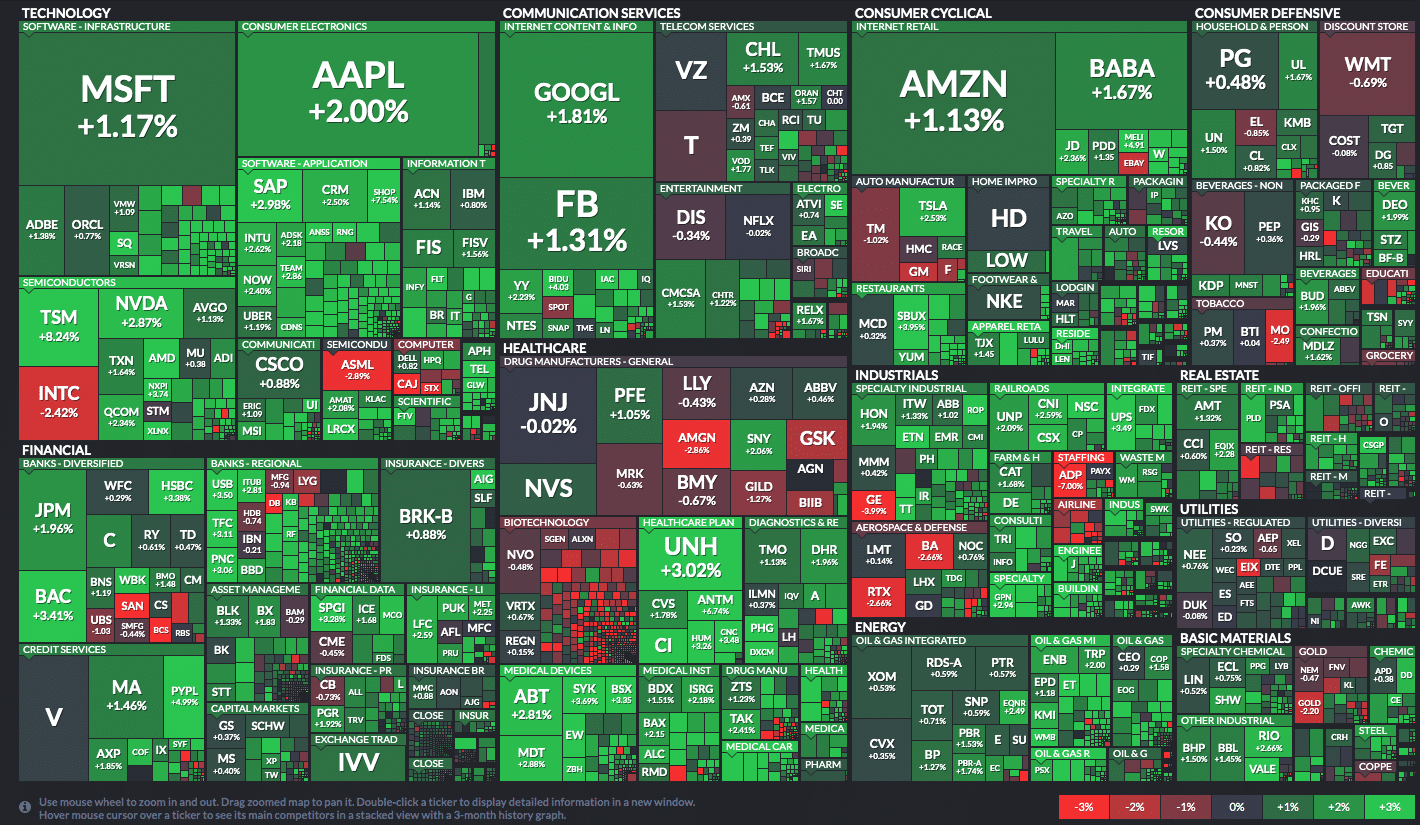 He also said that the coronavirus pandemic has left a ‘significant imprint’ on inflation.

For anyone interested in the full statement, here it is: 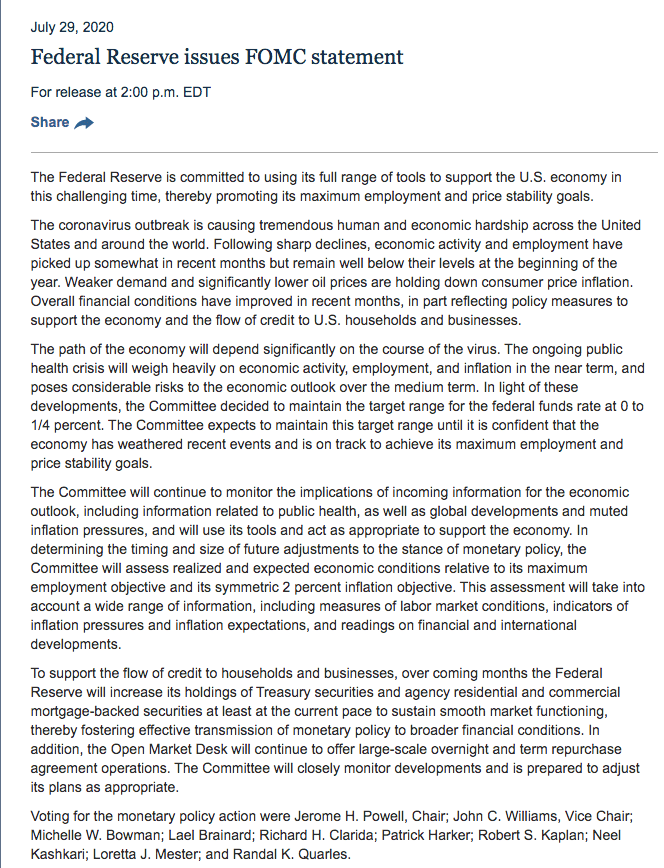 Blink Charging Co is up 37.74% so far today after the company announced it will collaborate with EnerSys to develop ‘high power inductive/wireless and enhanced DC fast charging systems with energy storage options for the automotive market.’

Just a reminder to all that there will be a Fed interest rate decision at 19:00 BST, and press conference at 19:30 BST.

Boeing shares are down -4.18% after the company reported a lower than expected Q2 EPS and sales results.

Boeing also announced it is cutting production on the 787 and 777 programs along with ending its 747 jet production.

Just a small move then!

DDTG Global will be happy!

It’s a positive start for US equities…

I’m late with this one, I know, sorry…

DAX is letting the team down!

In reality, it’s mixed across Europe, with the IBEX 35 and FTSE MIB also down so far today.

Eastman Kodak shares are trading higher premarket following comments from US President Donald Trump that the US had reached a “historic” deal with the company.

Cineworld shares are down over 11% so far today.

It could be down to continued coronavirus spikes in the US delaying theatre openings.

The solution is not targeted at the national public stock markets, but at regional equity markets that target local small and medium-sized enterprises for non-public issuances. For the Beijing area, the Beijing Regional Equity Market is the only venue authorized to process such transfers.

As of June 30, the Beijing Regional Equity Market had served more than 1,000 unlisted companies with a total share capital of more than 21 billion yuan ($3 billion) and held equity in custody for nine commercial banks.

Around the world, there are numerous startups focused on tokenizing private shares. The one that sounds the most similar to the Beijing initiative is Swiss-based Daura, which specifically targets Swiss SMEs and digitizes the share registry using the Hyperledger Fabric blockchain. However, investors can be outside of the country. The startup received funding from both the Deutsche Börse and Swiss stock market SIX.