Doctor-to-screen medical technologies are being accelerated by Verizon’s involvement in the Veterans Health Administration’s Innovation Ecosystem to help address COVID-19 and hospital needs.

Where once the family doctor would arrive in a buggy at a patient’s front door with leather bag in hand, looking to treat a sick mother or ailing child, now telehealth is transforming care delivery. With telehealth, physicians, clinicians and nurse practitioners can treat patients virtually from their own homes. Last year, online healthcare services were used by roughly 900,000 U.S. veterans.

That figure is expected to rise significantly given the acceleration of doctor-to-screen technology innovation within the Veterans Health Administration (VHA)—the medical component of the Department of Veteran Affairs (VA)—which is accelerating the effort to link physicians and nurse practitioners more closely to their patients, both at home and in the hospital.

High-speed 5G-enabled networks are key to these expanding capabilities. Recently, America’s first 5G hospital network was installed at the VA Palo Alto Health Care System in California, the result of the collaboration between the VHA’s Innovation Ecosystem (VHA IE), Verizon, Microsoft, and Medivis. This new high-speed capability helps support augmented reality within the operating room and may prove to help transform how doctors perform surgeries. 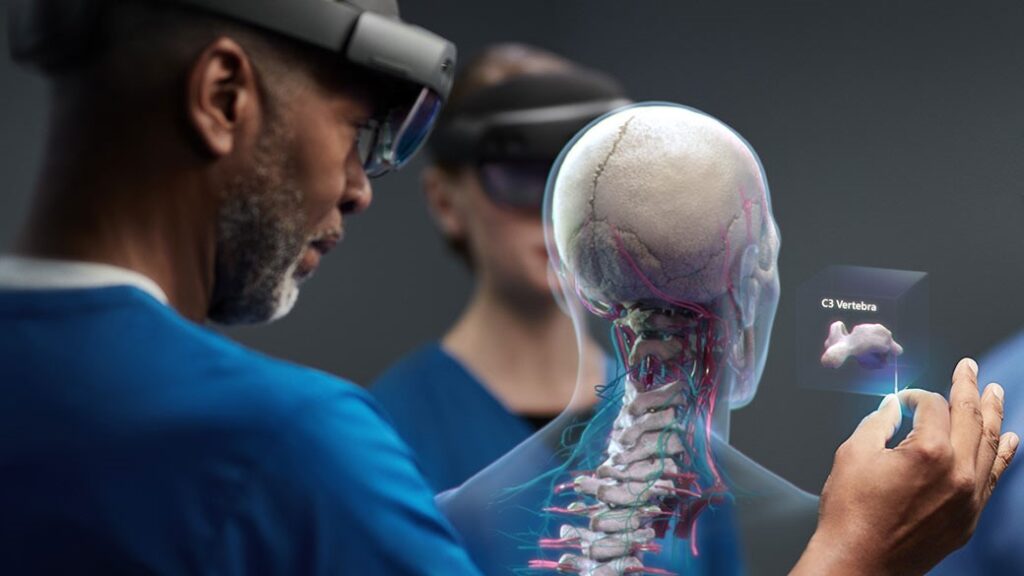 The HoloLens 2 mixed reality device from Microsoft will support augmented reality in the operating room. Photo: Courtesy of Microsoft

“Holographic visualization is the final frontier of surgical imaging and navigation,” said neurosurgeon and Medivis Co-Founder and CEO, Osamah Choudhry, in a statement.

Using this new FDA-approved system, surgeons can don a headset and visually immerse themselves inside a hologram that’s anatomically identical to the patient lying before him. Using the hands-free device, a surgeon can review critical data that’s been repurposed from a traditional two-dimensional image to a three-dimensional hologram. Doing so can give surgeons visual images to help them know how deep to make an incision, for example, how to navigate to a tumor, or rotate a 3D MRI image for a better view of a tumor.

To advance computer-assisted surgery, augmented reality (AR) is now being delivered to VHA operating theaters, and is bringing an array of high-definition visuals and changing the way surgeons interoperate and react with information. 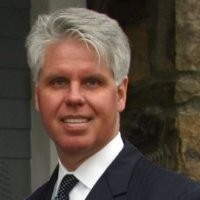 “These are amazing times,” said Brian Weaver, senior manager of business development for Verizon. “We’re now living in one of those inflection points in our industry.”

As AR evolves into a more immersive computing experience, it can also significantly advance our ability to perceive and interpret information. It’s predicted that the process of transferring vast amounts of data will focus tightly on the optic nerve. The human brain processes images 60,000 times faster than text. With 90 percent of information typically conveyed visually rather than through oral or auditory senses, the potential for high-speed data is enormous.

“It’s the reason we say ‘a picture’s worth a thousand words’,” remarked Weaver.

The Enabler for Telehealth

The new era of the visual Internet will arrive on next-generation 5G networks running at speeds 10 times faster than their 4G counterparts. This brings new opportunities to veterans across the interdisciplinary fields of medicine from cardiology to neuroscience, piped directly into emergency room and operating room environments.

“What 5G will deliver is richer, more detailed, three-dimensional images of the patient’s anatomy with resolution so clear and consistent that it will give us reliable use of important telesurgery services for veterans across the nation,” said Secretary of Veterans Affairs Robert Wilkie, speaking recently at the National Press Club in Washington, D.C. “That means reliable capacity to allow the VA’s best physicians to consult during surgery even when they are not in the same room or are halfway across the country.”

To deliver the platform that AR requires, Verizon is undertaking a massive fiber build out. This will dramatically expand its 5G network of fiber equipment to support the high-speed low-latency capabilities required to convert static 2D images into a visually dynamic 3D experience.

Developments in AR technology are accelerating rapidly , as evidenced by the VA Palo Alto Health Care System’s partnership with Verizon, Medivis, and Microsoft. Together, they’re working to bring the centralized power of the cloud into Mobile Edge Computing (MEC). MEC is a distributed cloud compute extension of cellular and non-cellular networks where data is processed and stored at the edge, with only key information transmitted back to a centralized cloud for backend services support. This can enable faster processing and increased bandwidth while opening the possibility for data to be processed right where it’s created, while supporting the capacity for vast expansion of Internet of Things capabilities.

“VHA invested in their innovation infrastructure and we invested in ours,” said Weaver of Verizon’s involvement in the VHA Innovation Ecosystem—which is designed to foster a climate of entrepreneurship within private, public and academic sectors. “This has allowed us to exchange ideas quickly and go directly to prototype implementation within very accelerated timelines,” he added. “We’re doing today what normally would take two to three years to implement, and as a result veterans can experience the most advanced systems of care delivered by the VA.”

Meeting the Demand for Virtual Services

In addition to its partnership with VHA Innovation Ecosystem, Verizon continues to offer network-level support to the Veterans Affairs through its VA Video Connect (VVC) telehealth program. This gives veterans unlimited access to virtual clinical services across the company’s nationwide network with zero data charges. 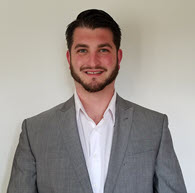 “We launched support for the application so that our veteran customers don’t have to take any action,” said David Caruth, Verizon’s head of military and first responder consumer marketing. “It’s a plug and play scenario, which gives our customers ease of mind.”

The rise in video telehealth services due to the COVID-19 pandemic has also brought massive increases in program usage. According to a recent VA report, the number of appointments made through VVC increased from approximately 10,000 to 120,000 per week between February and May.

To meet the growing demand for virtual medical services, the VA increased its server capacity and Verizon allocated resources to its original network design to support the growth without cost to the consumer.

Orchestrating a national network-level design that gives veterans access to data and telehealth services demand large-scale implementation and enterprise efforts. Through its collaboration with the VA Secretary’s Center for Strategic Partnerships, Verizon is helping to close the virtual gap between veterans and their VA health-care providers in both metropolitan and rural areas.

Roughly one-quarter of the nation’s veterans live in rural communities, many living 60-plus miles away from the VA’s 170 major medical centers and more than 1,000 outpatient clinics.

“We’re taking away that drive time,” said Caruth of Verizon’s telehealth contributions. “It’s a wonderful benefit to have healthcare brought to people in the comfort and protection of their own home.”

Verizon continues to support the armed forces, both in its initiatives and through its hiring practices. Designated the #1 Military Friendly Company for the past three years, Verizon has more than 10,000 veterans within its workforce. The company partners with organizations such as the Wounded Warrior Project, USO, the Army Museum Foundation, and Hiring Our Heroes, among others, putting into place the infrastructure necessary to recruit veterans as they transition out of the military into civilian careers.